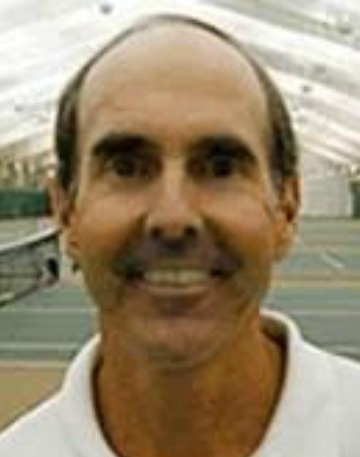 Paul Tobin, who started his career as a young tennis pro selling memberships out of a trailer in the parking lot of what was then known as Castle Oaks back in 1974.  Paul recalls the quiet surroundings of farmland & horses before there was a mall or restaurant row in the valley – when Chesterfield was out in the boondocks.  There were only 6 tennis courts & a skating rink then but members were lining up to get started!  Paul’s seen many tennis greats play on these courts, including former Wimbledon champs, Chuck McKinley, Stan Smith & John Newcombe, and tennis legend, Jimmy Connors, former #1 world player, whose brother John worked here.

Going back to his youth, Paul recalls growing up across from Wash U which had 10 outdoor courts, & it’s there his passion for tennis began.  He credits Larry Miller as his coach & mentor, who persuaded him to start tennis at Castle Oaks.  When he wasn’t on the courts, Paul was on the green, and in 1972 he was the head pro at Meadowbrook.  (Who knew?) While not as often as he’d like, Paul still hits the course every Monday, and stays active by riding his bike over 50 miles every week.

Paul proudly states that he and his lovely wife, Chrissy, have been happily married now for 43 years, and have 3 children & 6 grandchildren who are his true inspiration.   What Paul says he loves most about the CAC is the people – from the staff to the members, we are like one big family and we are always here for each other.  The sense of community is amazing and unique.

Tennis has grown tremendously since his early days, and Paul now has 10 pros teaching year-round tennis clinics, lessons and leagues.