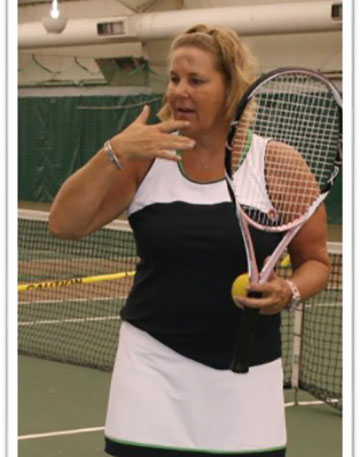 Tracy’s family was one of the first to join the club when it began as Castle Oaks, & playing tennis was a family affair. She grew up playing at the club & even played Jr. Interclub with Paul when she was 11! After graduating from Parkway Central, she went on to UMSL where she received a degree in History. But her passion was in tennis and she continued playing inter-club and USTA winning 4.5-5.0 sectionals year after year and placed 6th in the Missouri Valley doubles league.

In 1988 she began teaching as a CAC tennis pro & continued playing competitively until wrist & knee surgeries ended her playing career in 2004. She has taught ladies & children’s clinics, lessons & leagues full time ever since. You’ve probably seen Tracy in one of the club’s Cycle or Yoga classes which she loves, and when she’s not at the Club, her fav go-to place is Summits Hot Yoga where she goes to sweat off her stress or on the water skiing!