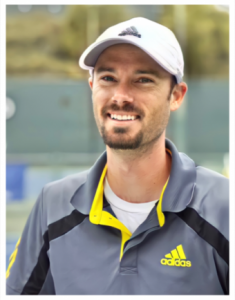 Growing up in Chesterfield, Kirk spent many hours on the CAC courts playing tennis with his father, Steve, and older brother, Mike Schaaf. As his love for tennis grew, so did his game. After advancing to State Finals in high school, he continued playing college tennis at Lake Land College in Illinois.

After college he moved to LA to become the Assistant Pro at the Riviera Country Club in Pacific Palisades. Over the next 8 years he coached Adult USTA and Westside Leagues, conducted Adult Clinics, taught private lessons and co-managed the Junior and Summer Camp Programs.  Prior to returning to Chesterfield, he was the Head Tennis Professional at The Crosby at Rancho Santa Fe and The Bridges at Rancho Santa Fe California.