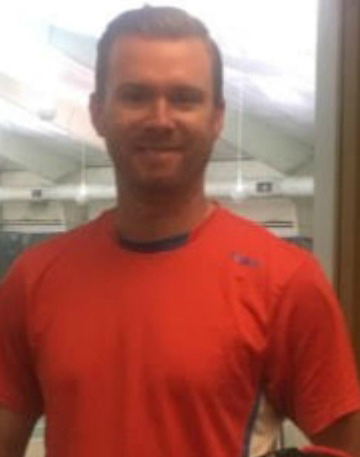 Tennis Pro, Mike Schaaf, and his family have been CAC members since 1994, and Mike’s been on the courts since he was 5.  Mike’s love for the sport quickly grew, and at 15, he started helping Tracy with the children’s tennis clinics, later becoming a full time pro when he was 21.  Working his way through college by giving lessons, Mike also played on the UMSL tennis team where he was awarded Freshman of the Year at GLVC Conference and was a two time first team All Conference winner.   Earning a degree in Exercise Science has helped him expand his knowledge in the field of sports kinesiology to help his clients with lessons in improving their game while maintaining their frame!   In addition to giving private tennis lessons at the club, Mike teaches clinics, extreme cardio tennis, live ball and runs tournaments with Wynn – the next one is coming up soon – Cinco de Mayo!

When Racquet’s Restaurant was open years ago, Mike met a beautiful young lady who worked there named Kelsey.   He was smitten from the start, and after 4 years of dating, they finally married!  They now have an adorable 9 month old son, Mason, who is the light of their lives, and Mike proudly shares that his family is the best thing that’s ever happened to him.  When Mike is not teaching tennis or hanging out with the family, you’ll see him on the golf course yelling, “fore!”