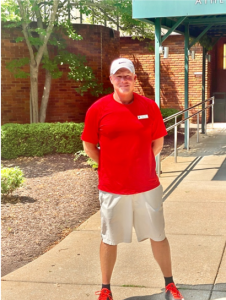 Unless you have been living under a rock, you know that our fearless tennis leader, Paul Tobin, has finally retired earning some very well-deserved rest.  After all 47 years of ladies interclub, men’s Saturday clinics and mopping up tennis courts must be a saintly record! Stepping into the role of tennis director/mediator/maintenance man /cheerleader/ peacekeeper and general tennis authority is our own Wynn Criswell.    As many of you know not only is Wynn a great instructor but he is also an extraordinary player.  He played on the ATP Challengers tour for 7 years competing all over the world.  I mean the dude was ranked 39th in the world in 1999 -that’s pretty fantastic winning over highly ranked players including James Blake, Mike and Bob Bryan and Sandon Stolle.

Another notable honor, he was named, “Tennis Pro of the year in 2007” by St. Louis Magazine.

He entered the doors of CAC in 2003, and we are sure glad he did.  He and Mike Schaaf founded the club’s Elite Junior Tennis programs for high school players looking to advance in the sport.  If you have ever been to Live Ball you know how he has grown that program phenomenally in the last few years.  He has coached ladies interclub teams, assisted in the men’s clinic and organized the first CAC Pickleball tournament including the Glo-Sport Social event. His enthusiasm for tennis is infectious which make his players and students strive to get better every day.  But what I admire most about Wynn, (other than his fashion coordination), is his desire to help others less fortunate, through tennis.  He created and implemented the Tennis Charity event, raising thousands of dollars for the Bipolar Foundation. He is constantly thinking of events to raise money and benefit charities in our area.  And his dedication to his family, wife of 18 years – Colleen, daughters – Natalie, 17, and Katie, 14, is paramount in his life.

He has played a lot of roles in his tennis career, even working the front desk (we know who to call if we need help answering phones!)  We are confident Wynn will exceed all expectations in this new role and look forward to what the future brings Wynn, our exceptional staff of tennis pros, the members and CAC tennis program.